Into war production at high pressure

Encouraged to do so by the Reich Aviation Ministry, Wieland invested in an impressive new extrusion plant from 1940. Four additional extrusion presses – mainly for light metal processing – went into operation there by 1945, and two more were almost completed by the end of the war.

In 1940, the increasing processing of aluminium and the high demand of the defence industry for pressed light metal products lead to a change of already made plans at the Voehringen plant: Instead of an aluminium rolling mill, Wieland built a new extrusion plant - on the instructions of the Reich Ministry of Aviation. This was a difficult undertaking because there was a shortage of building material due to the war and the plans were repeatedly changed. A building, originally just for one press, was thus turned into an impressive extrusion plant, 121 metres long and 46 metres wide. There was space for three horizontal presses and – in an adjacent building – for four vertical presses. 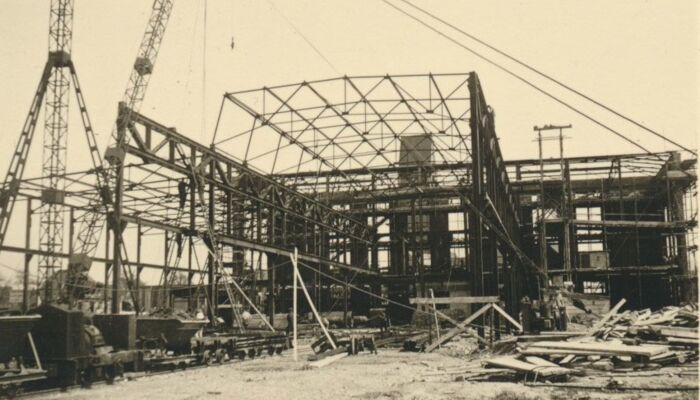 1941 saw the construction of the Extrusion Plant 2, with a size of around 5,500 square metres. The steel scaffolding and exposed brickwork were completed within the year despite war-related restrictions. 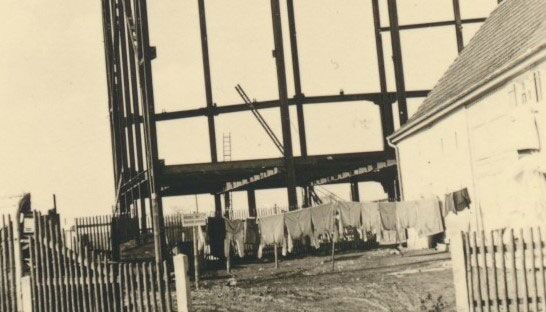 The building structure for vertical presses on the east side of the new extrusion plant was 40 metres wide and provided space for up to four extrusion lines.

The photograph of the west and south front of Press Plant 2 was taken in the summer of 1942 – even before completion – and conveys an impression of the impressive size of the new building.

At the end of 1942, the building known as Extrusion Plant 2 was completed. The first press had already been assembled beforehand; it was not originally planned and fell into Wieland's hands due to the war: a 10 meganewton vertical press, originally belonging to the "Compagnie Francais de Metaux", and had been transported from the French Givet to Voehringen as spoils of war.

Surprising loot: Press 9, which was requisitioned in the French Givet, was delivered and installed before the completion of the building construction. Its return after the war became a political issue.

The expansion of the new extrusion plant proceeded rapidly. Press 8 (30 meganewtons, mainly for aircraft profiles from Ulmal and Ulminium), press 13 (4 meganewtons, with multi-hole dies for the production of welding wire) and press 12 (27 meganewtons, for tubes and rods) were commissioned in rapid succession. It is noteworthy that Wieland financed the new plants entirely from its own resources and did not resort to loans from the Reich, which would certainly have been granted to the company classified as "important for the war".

The same applied to the other two presses installed in 1944: the vertical press 11 (6 meganewtons) and the powerful four-column press 14 with 50 meganewtons of press force. Designed for heavy aluminium profiles and large pipes, the plant was installed in spring 1945, but did not come into operation. And the Press 10 (13 meganewtons) ordered in 1943 was not even delivered until after the end of the war.

Difficult heavy work: The 45-tonne cylinder of press 14 was transported from the rail connection to the new extrusion plant 2 in January 1944 using the proven roller method.

Above all, the processing of the high-strength, heat-hardenable light metals Ulmal and Ulminium remained a technological challenge, despite the new presses. The alloys had to be quenched with water directly at the presses using special devices and then finished by hand at great expense. After all, the know-how gained in this process would still be of great use to Wieland after the Second World War.