A difficult balancing act between heart and mind

Corporate management during the NS regime

Karl Eychmüller held high offices in NS economic associations, was a member of the NSDAP and a "military economy leader". Yet, he and his board colleague Dr. Hans Wieland were certainly not convinced Nazis. The sense of responsibility for the company forced them to make painful compromises.

On January 30, 1933, the National Socialists took over the government in Germany, Adolf Hitler became Reich Chancellor. Three months later, on May 1, 1933, Wieland board member Karl Eychmüller joined the NSDAP. This, however, was not out of inner conviction, but out of pragmatism. He himself said after 1945, he joined "the party", because "the tradition of the Wieland-Werke was endangered without my joining". In fact, members of the Wieland family were considered politically unreliable liberals in the Nazi state, which made their position and that of their company vulnerable to attack. Board member Dr. Hans Wieland joined "the party" in 1938.

The courage that Karl Eychmüller and Dr. Hans Wieland certainly demonstrated at that time deserves respect. Jewish employees were employed for as long as possible, the workforce was protected from attacks by the Nazi regime and from denunciations wherever possible, and foreign workers were treated decently. At the end of the war in 1945, Karl Eychmüller saved Ulm from further senseless destruction by organizing an orderly handover to the Americans. This was a courageous undertaking which to this day has earned him the respect of many citizens of Ulm.

After the end of the war in 1945, Wieland's board members Karl Eychmüller and Dr. Hans Wieland were subjected to a denazification trial due to their NSDAP membership. In both cases the tribunal in Ulm came to the conclusion that they were not convinced National Socialists and classified them as "mere nominal members".

Despite this, their great commitment to the company played into the hands of the Nazi regime: it was in urgent need of key technologies and products essential to the war effort. On the other hand, Wieland profited enormously from the armaments orders, too. The fact that their entrepreneurial activity was taking place within the framework of a criminal system could not remain hidden from the two board members. They came to terms with the circumstances and defined their personal priorities according to the well-being of the company and the effort to remain as faithful as possible to their own high ethical standards. They were not alone in this attitude; numerous other companies in Germany were trying to make it through the Nazi era with economic success without identifying with its ideology and crimes. 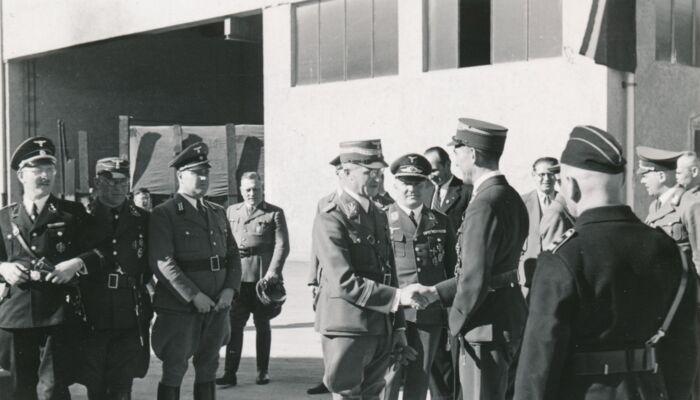 In 1939 Karl Eychmüller welcomed big NS names to a factory visit. It was the only - and arranged - occasion on which he wore the uniform of a "SA Rider Storm Leader".

In 1948, after hearing 12 witnesses, the tribunal classified Karl Eychmüller as a "mere nominal member", partially based on the fact that the "public opinion did not regard him as a Nazi."
(Copyright Staatsarchiv Ludwigsburg: EL 902/21 Bü 980)